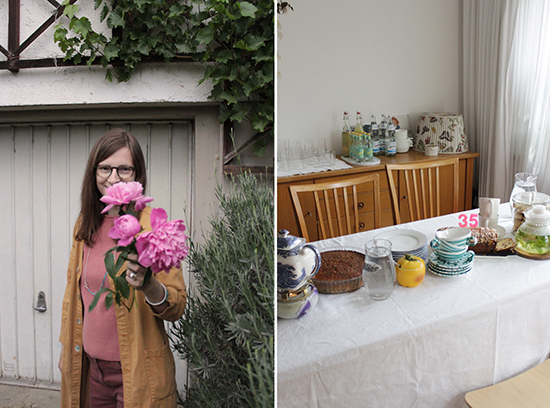 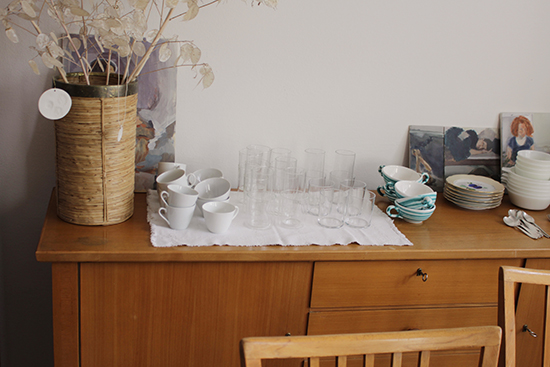 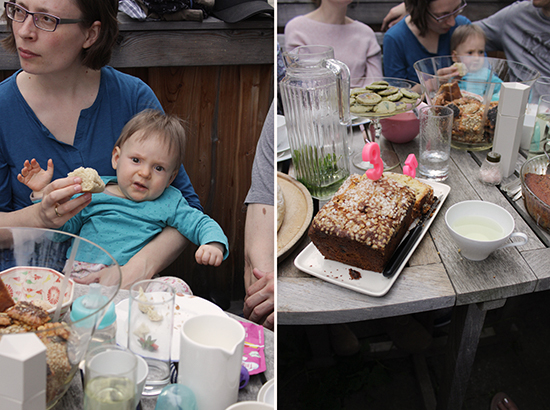 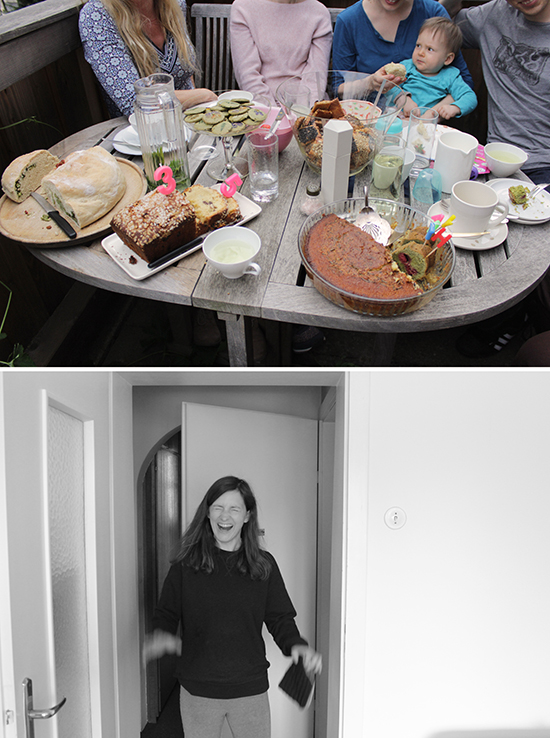 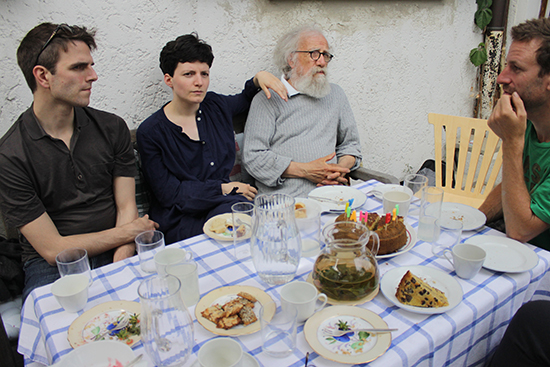 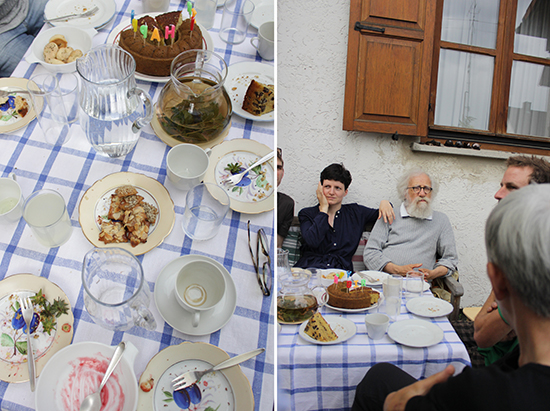 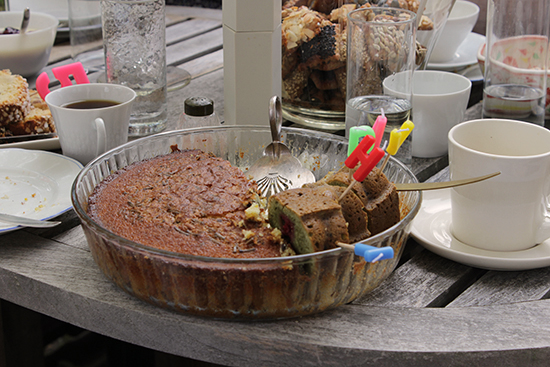 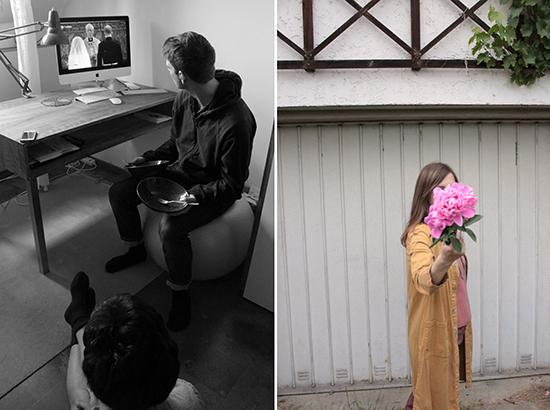 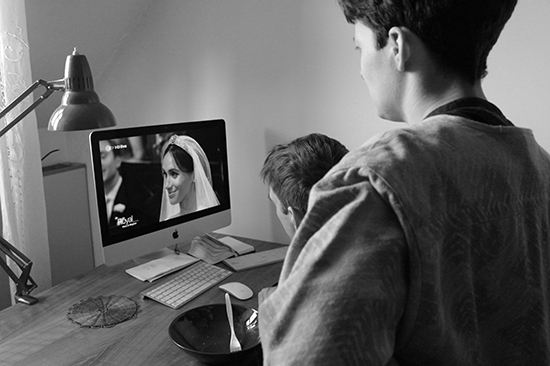 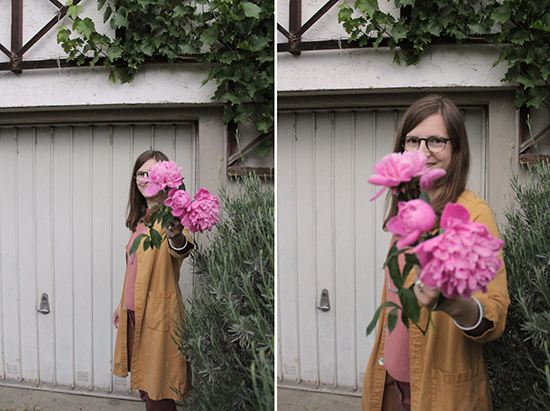 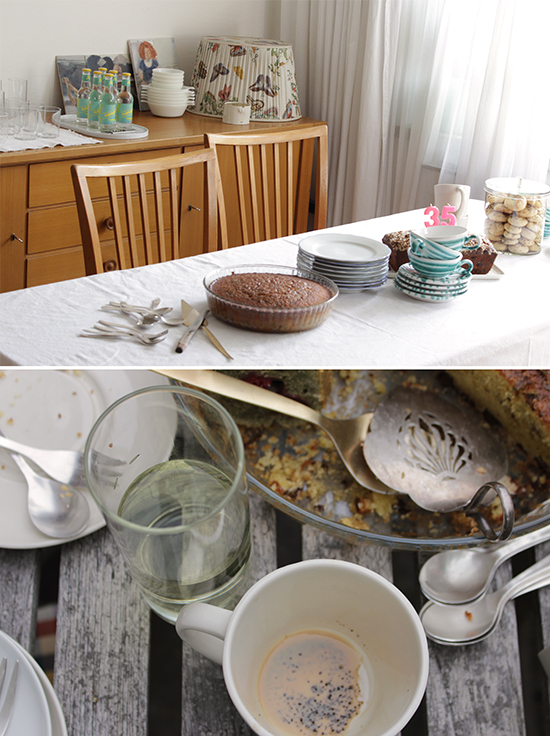 I wanted a birthday party and I wanted pictures of it - I got both. My sister´s boyfriend took most them, but he was too shy to point the camera at the faces of the guests he didn´t know, which is actually great because of GDPR. My god daughter however always takes the cake or is is the cherry on top of it (depending which saying you like better, as long as it involves cake you´re good, I´d say), so I am really glad her privacy officers let me use hers. Everyone else is looking slightly distressed, just as it should be - it is a birthday party after all.   -   And yes, I did go to the 1€ store and bought myself some highly poisonous looking and smelling candles to put on top of a cake. For safety reasons we made sure to never light them.

While watching the royal wedding, we make a filled bread for my birthday party. I have been making this one based on an early Jamie Oliver recipe for special occasions for more than a decade now and this time we put in arugula, green asparagus, toasted almonds, dried tomatoes and olives. It says "denocciolate" on the jar, making my sister giggle. They are the bland kind, perfect for a baby´s palate, perfect for us. There is thunder in the air, right up until the first guests arrive, then the weather switches to blarring sunshine.


I tell my sister about an ARTICLE I read on The Cut (a website I really like), about how an income over 75.000$ can´t make you happier money wise. Since this number seems to abstract to us, we break it down to 6.750$ a month. We ponder this for a second and then start to laugh hysterically. There is no way we will ever be happy "money wise", so we decide happiness is overrated anyway. It is probably a myth, possibly made up by CocaCola. Just like Santa or Mother´s Day, an opportunity to make a lot of money. We conclude therefore, we don´t need happiness after all - it´s so capitalistic anyway. We also think that the wavy Ikea mirror is going to be a democratic design icon soon, maybe the hugging heart cushion, too. Not too gross species will score high prices at future auction houses and I am wondering if I should start prising off those mirrors off the hallway and bathroom walls in every student flat share I might come across, before they get too baldy chiped. The income from auctioning these off might increase my happiness in later days. Problem is, I don´t know any students anymore. My sister says she feels misrepresented by this account of our conversation, since I did most of the talking - I just thought you should know.

FREDMINUSERIKA did a post about what not to tell the internet, how she uses English to distance herself from her feelings and how her therapist wants her to use German instead. This might very well be true for her - I have been accused of the same thing. But I on the other hand still insist that this is not what I am doing - it is one of the things I call "therapist´s talk" I had to distance myself with a lot of force. By talking and writing in English I finally found a way to express what I feel, when the words given to me by way of where I live, were always feeling slightly wrong. I am never "wütend", I am "angry" instead and this anger has no stiff and pointy ü-sounds in it. And while it would have been accepted by the medical professionals to use my regional idiom and say "wuadig" instead, just very few people would have understood. And to share your feeling you have to be understood I am told, so I went with the most understood language there is. And how can I give up that significant pause between "a" and "lot" when saying "a lot", when there is only "ganz schön viel" in German? It just really is not "a lot" and sweetly "ganz schön viel" makes me "wütend" in an instant. Telling me I can not use English in my writing and discussing things with my sisters, felt a bit like telling an artist that her/his work is all wrong since the only way to express love is by painting red hearts. I am not an artist, but last year I decided that my whole life is an artistic practice, a decision which made me very happy and my sister - who actually is an artist - very annoyed. I also got advised to not get glasses when I started to get shortsighted - a 20cm distance between your eyes and the workbench can cause these things over the course of a few years, but it was considered a psychosomatic issue instead. When half a year later I couldn´t recognize people in the street anymore and ran around squinting all day, I went to an optician, got glasses anyway and have never looked back ever since. I am shortsighted, that´s it - no mystery reason behind it. And I always wanted glasses anyway. I do however use retail therapy a lot, that is probably why I never talked about that with my therapists. Maybe because I am ashamed of it, but maybe because it really works and I don´t want to give it up.

I have never painted my toe nails sitting in a bus stop. When I see a girl doing so I realize this to be one of the millions and millions of things I have never done, nor will do. I have however returned to my routine of GERANIUM red toe nails, since it has that blueish hint in there, complimenting red feet so well and I really like a geranium.

Even though it is probably hight time to wash it, I like it when my hair starts to smell like my cat.