these first weeks of the year haven´t been easy for quite some people
and i do hope it´s going to start looking better for all of you
made my pain feel benign
it looks like it´s fading a bit now - knock on wood
and i´m starting to feel like my old self again, a bit tired out and worried though
the only likely explanation is that my back starts to affect new parts, systems and organs now
my physiotherapist is working on that and we´ve found some unbelieveable hurtful parts
once we had to stop otherwise i would have been sick all over the place
too much pain right under the sternum, making me feel nauseous all the time
enough complaining
.
W said it´s about time to pick up a dangerous hobby
since what harm can it do, i´m already damaged
so i was watching the olympics for inspiration
but the snow boarders only made me think of a younger me
watching some friends skate boarding for hours
being bored out of my mind and never tempted to try it myself
(of course one couldn´t admit that, since those were the cool guys and i´m very much not)
their way of chilling out and talking so slowly made me itchy and i´m not even an adventuresome person
they were really nice guys, but get a move on!
me = totally unchilled
.
what i did was finally popping some asprin,  proofing my uncoolness
and bidding on tap dance shoes for E and me
when i told her about my ambitions for our performances she just said
"whatever - i just found a video of myself pretending to be a tree
and i was very good at that, so tap dancing is really not a problem
- performing is my profession."
(she also told me i was going to live till the age of 85,  which probably will be like THIS)
and that´s my favorite TAP DANCE SCEEN - people, people, people!
.
also i started to believe in the healing powers of the colours hot pink and yellow
yellow because of  sunshine and TURMERIC and the sight of puffy mimosas
hot pink just because
applying lipstick is also  a good remedy
and i´ve found the moon posts on THE SPHINX & THE MILKY WAY rather soothing
(this does not mean i don´t believe i "real" medicine though!!!)
.
i´m currently on a sawing break to avoid a sore ellbow
but finally it looks like we´re going somewhere - or not
now we´re moving on to the bigger pieces
.
those GARDEN PICTURES make my heart ache
S forced some chestnuts, they look positvely creepy 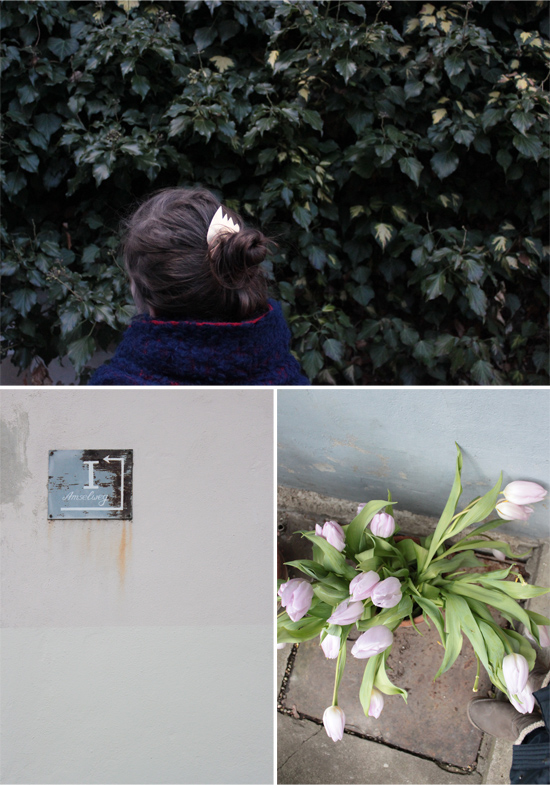 quiet times around here
taking lots of walks
in an oh so ugly neighbourhood
nice trees and house number plaques though
.
needed a bit of yellow to make up for the missing sun
mimosas - again
and since it´s Valentine´s Day
i filled the little porcellain guys heart shaped vase
(i think he loves me, hihi...)
primroses - i have a thing for them since LAST YEAR
and couldn´t resist a light green and almost grey one
they´re called "auriggerl" around here
could there be a better name for anything?!
.
it took us quite a while to finally come up
with a piece of hair jewellery that actually works
lots and lots of prototypes
but now i think that cockscomb thing looks quite fun
a few more shapes are still under construction
.
watching a bit of olympics
thinking of wearing my hair like the girl opening the gates for the figure skaters
reading a lot of  KATE ATKINSON
i think she´s fabolous
even her dog characters and i´m not even into dogs
lots of drowning, missing sisters and, well life and death
(although the Jackson Brody sequels can´t keep up with the first one)
picked up EAT after reading NINA´S post
.
happy Valentine´s Day!