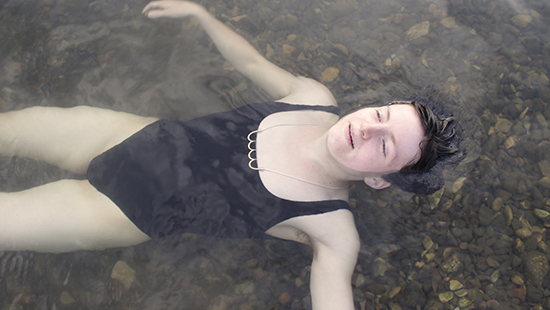 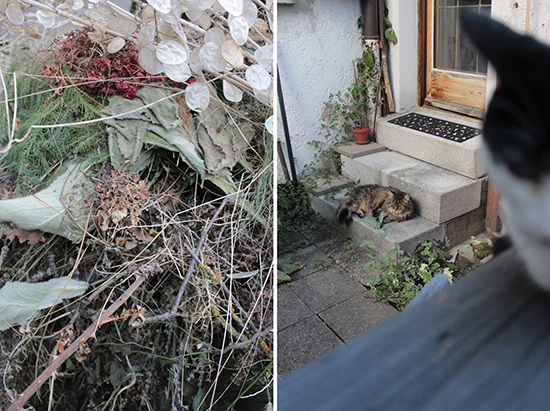 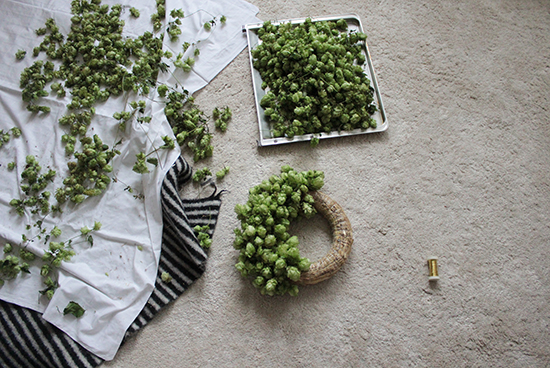 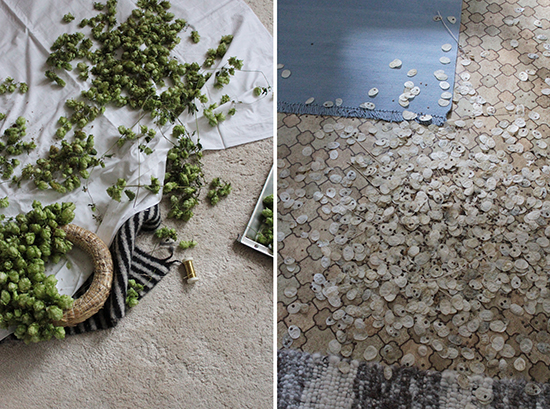 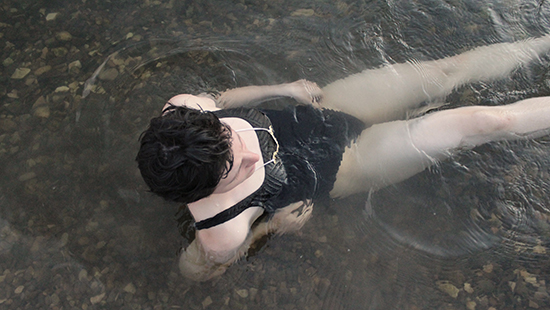 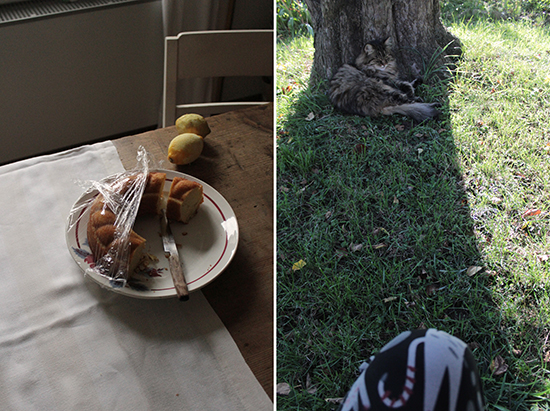 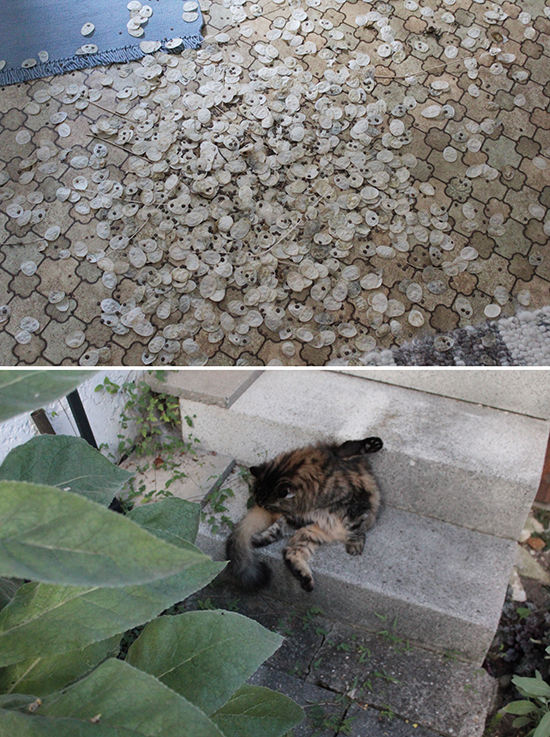 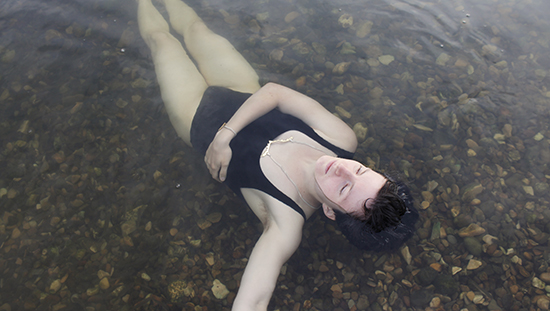 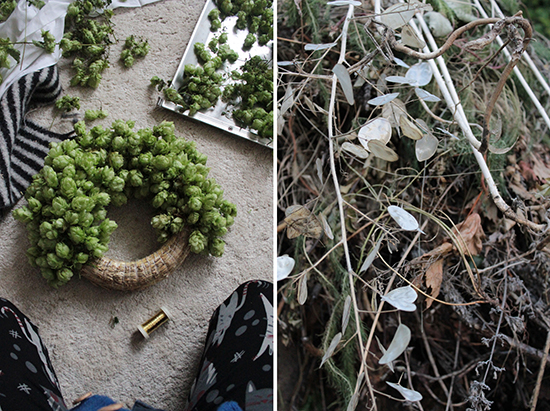 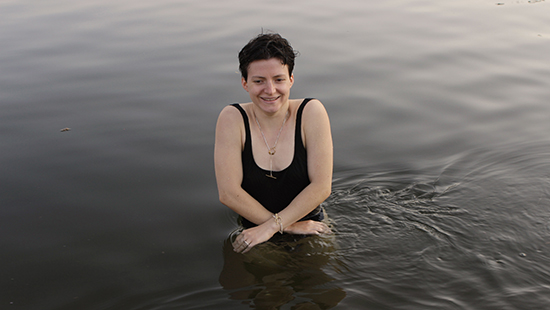 (late Summer 2017: outtakes of my sister E splashing around in a nearby river; my cat´s stalker who terrifies her so much she´s by now quite fond of staying in; Rachel Roddy´s RICOTTA, LEMON AND OLIVE OIL RING CAKE - boring at first, getting better with age and since I seem to have a thing for ring-shaped things: a wreath made of hop harvested too early - no intoxicating smell at all; also compost heaps - my favorite subject)


My sister is doing some "menstruating on the night train" to Bologna to try for a modern dance company there and I think she could maybe turn this into a song. I tell her she wouldn´t have to if she were on birth control like I am, which in my case is "period control" and that is even better. A few hours later I find out my body decided it actually won´t be controlled like that and does a little bleeding despite all those artificial hormones. I´m shattered by that fact, of course. When I learned about periods I pretty much lost faith: such a betrayal of nature, a fault in evolution - I can find absolutely no beauty in this messy circle of blood and pain.

For a few months now I have realized I might suffer from something I´d call the "Monday scaries" (since there are already a lot of day-related "scaries" out there) - I wake up full of dread and midmorning is spent in a kind of horror. Maybe it´s because my week starts with a physiotherapy session I´m dreading, maybe it is basically all that is ahead of me, a full seven days. Having always been an anxious person I´ve felt uncomfortable before certain, even minor events but when I braved them I went away flushed with relief and in kind of elated spirits. Now there´s only anxiety left and I don´t even get to be high on adrenalin afterwards. And that anxious scare becomes a permanent feeling, a thrumming undercurrent, no more spikes and delicious calm after. I´m not shutting down anymore and I really wish my body and mind could actually go into stand-by mode at some point with the same sound my external hard drives make when they do so. They also send out a last flicker of light and then they´re done - I´m done too, but still running. I´m so tired.

A few nights ago I woke up freezing and had to put another BLANKET on top of my summery duvet, just like Carrie did in that episode when fall comes to Sex and the City - it looked like such a romantic thing to do, but when I woke up to the first dreary foggy morning it most definitely wasn´t. There is only one nostalgic back-to-school memory I got - it is riding my bike home from school on one of those first fresh days after the long Summer break when there is still that bright stark blue autumnal sky and splendid sun and I´m excited since I know W is making sweet dumplings filled with plums for lunch and the air is filled with the lovely scent the sugar mill spreads all over town in early fall. That factory is gone by now and I do miss that stench and the trucks filled with sugar beets rattling by. But W promised me to help me make those dumplings again - by now we switched from the ones made of old dry white bread to those with quark dough and a lot of roasted ground hazelnuts in butter on top.

Summer is definitely gone by now, I don´t only need to wear a woolen coat to nightly city strolls but at all times and when there won´t be any more tiny tomatoes at the farmers market the PASTA WITH TOMATOES, BASIL AND BRIE season will end, too - it was a short but sweet one!

Usually social media, especially Instagram, isn´t stressing me out and doesn´t create envious feelings, but when there is an increase in output of creativity - mostly around various fashion weeks - and I see all those marvelous people putting out so much great stuff it is a bit hard to stay, well, content. I´m most interested in watching making offs, so of course I check into all those Instagram stories to catch a glimpse behind the scenes. And doing so I realized these gorgeously dressed and groomed, obviously capable, talented and by the looks of it really nice people are not on their own - it is always a huge team effort. The realization that they probably aren´t super-humans after all is a relief, but then it makes me wonder - do I have some kind of team in work and life? My dad is basically "production", I get a lot of input from my sister and there is always financial support in case I need it. And even though there is a loose circle of friends, I feel like most of the time I am my own team, I am "it". It is a luxury to be able to base decisions on your own whims which I enjoy very much, but it is also quite tiring. When it comes down to it I am my sole provider, carer, uplifter and supporter - all the hot water bottles are filled by me, every pot of tea made by myself. It sounds like I´m looking for a team of nurses, but that is not what at all I want - there is only that much fun to be had on one´s own and I need a lot more of that fun. A LOT MORE! I want to feel close and safe a lot, almost always at best. A lot more of the old connections where you know exactly what madness and fun awaits, when you try to set up a dear friend with your sister´s best friend by sending him a picture of her eating ice cream, or the group of friends who you always meet by chance and it turns into a such fun every single time and now you also know them from someone else´s Tinder profile since he didn´t bother to blur their faces. And then there are new encounters, when someone compliments your shoes (they really are nice, forgot way too long about them) and then you end up talking all evening, about how a lone cynical mindset might be safe and fun, but how about a beautiful night like this one? How does a person do "close" and "team" when a lot of things just feel like too much?

Someone lets me sprinkle his black artificial leather couch with powdered sugar falling from very brittle Italian cookies and use his Amazon Prime account to watch "I Love Dick", which makes me call my sister late at night telling her that all of those things that feel like failure to her right now are actually the best that could ever happen, because everything will be turned into an amazing series. I have so many ideas already for her, including such a lovely finale, and she is (hopefully for real) thinking about getting a masters degree in Media right know, since that is apparently how to get funding for those kind of things. She thinks her friend who just started working at McDonalds until she finds a job as a dancer and hasn´t stopped crying since might also be on board.

The other day I made this beautiful noise and it was kind of sad no one else got to hear it, they might have liked it.